A Highly Protected Marine Area (HPMA) is defined as “ an area of the sea that allows the protection and recovery of marine ecosystems by prohibiting extractive, destructive and depositional uses and allowing only non-damaging levels of other activities”. They are different to other marine protected areas as they aim to protect all species, habitats and associated ecosystem processes within the site boundary, including the seabed and water column. In comparison, many of our current Marine Conservation Zones (MCZs) and European Marine Sites (EMSs) were designated to protect specific features.

It is anticipated that the following activities will be prohibited in HPMAs:

More information on the process for selecting HPMAs and the reasoning behind them can be found here:

Will there be a HPMA designated in the North West?

Defra is currently consulting on 5 candidate sites to put forward for designation as HPMAs. One of these proposed sites is Allonby Bay, which is located in the North Wesern IFCA District.

Allonby Bay is an inshore site situated in the Irish Sea, extending approximately 8km seaward from the shore between Maryport and Mawbray. It follows the mean high water mark out to a maximum depth of 8m, covering 38.5km2. 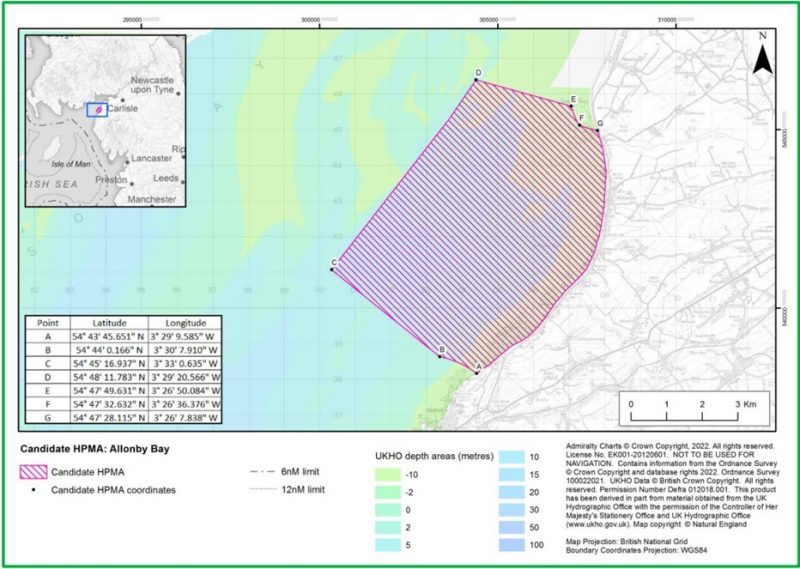 Allonby Bay consists of a mix of habitats, characteristic of an environment that is subject to dramatic currents and tides. The seabed here consists of a range of rocky habitats and sediment dominated habitats, including mudflats, sandbanks, reefs, peat and clay exposures, and biogenic reefs.

The nutrient-rich sediments, dense mussel beds and intertidal rocky habitats in this area attract large densities of shore birds including species such as curlew and oystercatcher. The biodiverse subtidal habitats here provide a food source for fish species, such as flat fish and nursery areas for other species such as bass, cod and herring. In turn, these fish species attract diving, foraging seabirds including guillemots, gannets and razorbills.

The site holds one of the best examples of honeycomb worm reefs in the UK. Honeycomb worms create a complex sediment network of tubes attached to rock, which provides vital habitat for a range of species including crabs and molluscs.

Information on why this site has been identified as a candidate HPMA and further information on the habitats and species associated with the site can be found here:

Over the summer, DEFRA led a public consultation, which included a 2-day stakeholder workshop in Maryport in early September. The online consultation is now closed, however, details about HPMAs and the proposal for Allonby Bay are still available on the DEFRA website Consultation on Highly Protected Marine Areas (HPMAs) – Defra – Citizen Space.

Newcastle University also conducted a study to gather stakeholder opinions on the HPMA that has been proposed for Allonby Bay. The aim of this study was to follow up in more detail, stakeholder views that were raised at the DEFRA public stakeholder meeting, and encourage anyone who is likely to be affected by the proposal to discuss their concerns. Newcastle University researchers came to Maryport on the 20th and 21st of October for drop-in interviews. A report on this will be submitted to DEFRA in November 2022 to further inform the selection process for HPMAs.