Although thankfully not a common occurrence, there have been distressing reports in the past of numbers of birds getting caught up in the nets and drowning. Obviously no one wants or intends this, and fishers themselves have been deeply upset when it has occurred.

As fisheries regulators the NWIFCA has a duty to ensure that netting is not having a damaging effect on birds. The breeding season is the crucial time for seabirds such as razorbills and guillemots nesting on the cliffs at St Bees. Last year the NWIFCA brought in the Voluntary Closure for the first time and can report 100% compliance from both commercial and recreational fishers. The support of all allows the Authority to feel confident in implementing the closure again this year as a measure to protect the breeding birds and their young while they are in the area.

St Bees is an important cliff habitat for breeding seabirds, and is designated as a Site of Special Scientific Interest (SSSI). It also lies within the Cumbria Coast Marine Conservation Zone (MCZ). Many of the bird species are diving birds which have the potential to become entangled in nets when searching for their food.

Under the Code of Practice all netting activity, whether from the shore or from licensed or unlicensed fishing vessels, should be avoided during the period 18th March to 22nd July (provisional date) in an area from the mean high water mark extending out to around 1km. The date the closure will be removed is provisionally set as 22nd July, but will be finalised during the season and will depend on advice from Natural England on the behaviour of the birds and timing of their breeding and fledging which will be weather dependent.

NWIFCA Officers will monitor the effectiveness of this Voluntary Code of Practice again this year through boat and cliff patrols to inform the Authority of whether more stringent management is required.

To reduce the risk of bird entanglement in fishing nets the NWIFCA recommends that the following Code of Practice should be followed:

The sea around St. Bees Head is important for many species of birds which nest on the cliffs and feed on fish in the area. Some of the birds are susceptible to becoming accidentally entrapped by nets and disturbed by vessel movement. At particular times of year (around the breeding season) these birds are at especially high risk. Nobody wants to see birds caught in fishing gear, including those fishing the gear. Apart from the obvious damage to those individual birds, it can cause distress to the public and lead to a damaging perception of fishing.

Note: St Bees Head is a Site of Special Scientific Interest (SSSI) notified under Section 28 of the Wildlife and Countryside Act 1981, and an RSPB Reserve. 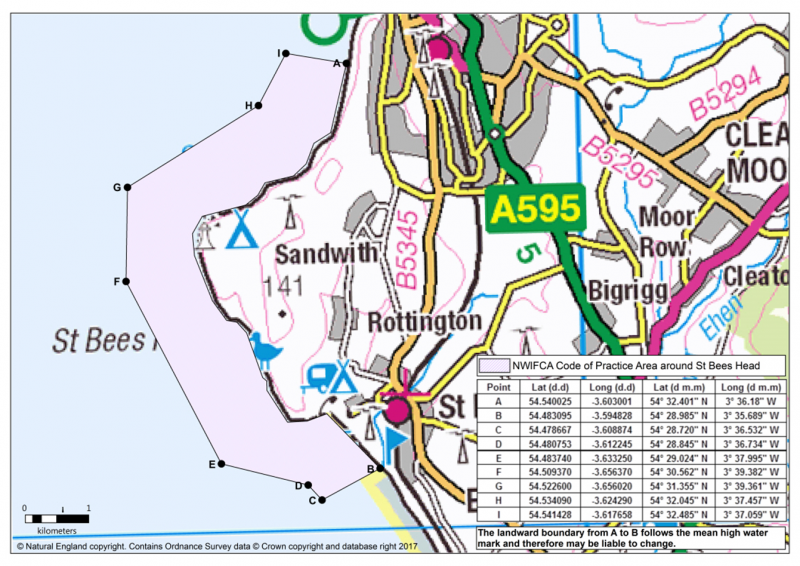 Map is for illustration only and should not be used for navigation.